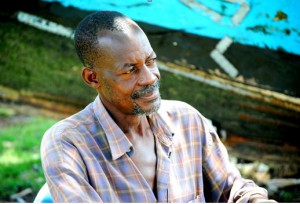 Stricken with TB, George had given up hope of survival until the STAR-EC project arrived on the shores of Dolwe offering treatment.

In 2012, George, a fisherman living on Dolwe Island, located in Uganda’s Lake Victoria, developed a terrible cough and pain deep in his chest. The pain got worse and worse until George was no longer able to fish. He went to the mainland to get cough medicines and various remedies, but nothing helped.

Finally, George split his savings of 300,000 Ugandan Shillings (approximately $130), gave half to his wife to support their five children, and took the other half to pay for the eight-hour boat ride to the hospital in Jinja.

It was there that George tested positive for tuberculosis (TB). Upon his diagnosis, he was told that he would need to stay at the hospital to recover his health and undergo eight months of treatment. Having just spent almost all his money to travel to Jinja, George could not afford to stay and be treated. Despondent, he returned to Dolwe. “I was without hope,” he remembers. “I knew that I would die very soon from TB.”

However, a few days after George returned to the island, a flurry of activity erupted in the village; a huge, steel fishing boat had anchored in the harbor and was unloading skiffs full of medical supplies.

The boat was the R.V. Hammerkop, a 50-foot fishing and research vessel hired by the USAID-funded STAR-EC project to carry tents, medication, supplies, medical personnel, and volunteers to Dolwe Island for a week-long integrated service outreach. STAR-EC set up tents offering HIV and TB prevention and treatment services, including TB screening by way of a mobile laboratory.

George, weakened by the advancing TB, made his way to the tents on the first day, registered, and again tested positive for TB but negative for HIV. He was immediately enrolled in treatment, a daily regimen of antibiotics to which he would need to strictly adhere for eight full months.

George was assigned a village health team  member—a local volunteer trained by STAR-EC to help link people in their communities to health care and encourage patients to adhere to treatment. Michael, the village health team member, went to George’s house every day for all eight months of his treatment to check on George’s wellbeing and make sure he was taking his medication.

“Michael came every day, no matter what.” George recounts, gratefully. “It helped me remember to keep taking the medication, even after I started to feel better. He encouraged me to stay hopeful and told me that I was going to live.”

George started feeling stronger a few weeks into treatment, and gradually started to fish again. He took his medication every day until the last day of treatment in December 2013. Upon completion, he was tested again and found to be TB-free.

George has learned a lot about TB and HIV prevention through his experience. “I also learned a lot about HIV through this experience—how people who have HIV are more likely to get TB. Now I get tested for HIV regularly, and take my wife with me to get tested, too. We will encourage our children to do the same and they will know better than I did about these diseases.”