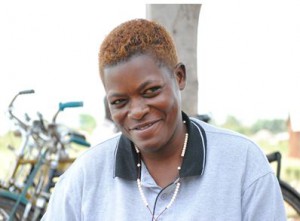 Barbara is living with HIV on Dolwe Island and is alive and healthy thanks to the antiretroviral drugs made available to her through the support of the USAID-funded STAR-EC project. Barbara was also trained by STAR-EC to mobilize members of her community to seek HIV and other health services.

Barbara is well known in her community of Sigila, a village on Dolwe Island in Lake Victoria in Uganda. As a village health team member, she has gained her neighbors’ esteem by educating them about HIV and connecting them to health services. Barbara’s warm demeanor and infectious laugh inspire confidence and trust.

Before today, however, Barbara was without hope, bedridden, and facing death.

In 1997, Barbara was living on the mainland in a town called Wakiso with her husband and two children. She was pregnant with her third child when her husband fell gravely ill and died. “I was devastated and scared,” she recalls. “I had no idea how I would support my family.”

She and her children moved to her sister’s in Kasubi, where Barbara struggled to make a living by selling foodstuffs. In 2003, Barbara started feeling sick. She was losing weight and became very weak. Her sister convinced her to go to the hospital, where Barbara tested positive for HIV and enrolled on antiretroviral therapy.

Barbara’s health improved on treatment but she was barely making ends meet. After hearing that there were opportunities to make money on Dolwe, Barbara moved to Sigila, a small town on the island, and found steady income selling food and other goods. However, she no longer had access to treatment because at the time ARVs were not available on the island. Too poor to afford regular trips to the mainland for ARVs, Barbara switched to a regimen of prophylactic Septrin, the only drug available on the island, and hoped for the best.

In 2011, however, Barbara’s health took a turn for the worse. She became too weak to work and eventually could not get out of bed. “I was dying,” she says. “Everyone who saw me in that condition—including my children—wrote me off as a dead woman.”

Around that time, however, the USAID-funded STAR-EC project brought HIV treatment and prevention services to the island, and ARVs became available at the Sigila health center. STAR-EC also trained local village health team members to link people in the community to care, and Barbara was brought to the health center and resumed ARV therapy.

“I was so sick and at first the medication made me feel even worse,” Barbara remembers. “But the village health team member checked on me and encouraged me to stay on the drugs.”

Barbara took the ARVs every day and returned to the health center each month to refill her prescription. She started regaining strength and, after a few months, felt healthy again. One day, she saw a flier at the health center calling for applications to become a village health team member. Barbara applied, went through the training program, and became a very effective mobilizer in her community. She is so good at communicating health information and linking people to care that STAR-EC designated her an expert client—a person living with HIV who is on treatment and trained to counsel and link others to care.

Barbara works at the health center and in the community six days a week. Although it is a big commitment, she is deeply gratified by the work. “I was almost dead—I had no hope left. And now look at me! I am healthy and I can live.”